PYTHIA is a program for the generation of high-energy physics events, i.e. for the description of collisions at high energies between elementary particles such as e+, e-, p and p̅ in various combinations. This also includes heavy-ion collisions. The program contains theory and models for a number of physics aspects, including total and partial cross sections, hard and soft interactions, parton distributions, initial- and final-state parton showers, matching and merging of matrix elements and showers, multiparton interactions, hadronization/fragmentation and decays. It is largely based on original research, but also borrows many formulae and other knowledge from the literature. The code package includes interfaces for input from and output to other programs, but the core can be run standalone, and contains enough tools to allow simple analyses.

Development of JETSET, the first member of the "Lund Monte Carlo" family, was begun by members of the Lund theory group in 1978, and has continued since then. A number of people have contributed to this and other programs based on it. The most extensive of these is PYTHIA. Over the years, these two programs more and more came to be maintained in common. In 1997 they were therefore merged to one, under the PYTHIA label. Up until a decade ago the main version was PYTHIA 6.4. After 2004 the evolution slowed down, however, and in 2012 development was definitely stopped. It is now reduced to the status of legacy code.

In 2004 a rewriting from Fortran 77 to C++ was begun, and with the release of PYTHIA 8.1 in 2007 the new code became the official main version. In reality the experimental community continued to rely largely on the 6.4 version for LHC run 1, but by now the transition to PYTHIA 8 is complete. The releases of PYTHIA 8.2 in 2014 and PYTHIA 8.3 in 2019 underline the nature of a by-now mature product with a (reasonably) smooth evolution path.

PYTHIA/JETSET has been in heavy use at almost all high-energy colliders of the last 40+ years, such as the PETRA, PEP, TRISTAN, SLC and LEP e+e- ones, the HERA ep one, the Tevatron pp̅ one and the LHC pp/pA/AA one. It has also been used in the study of all proposed future colliders, in many fixed-target experiments, in cosmic-ray studies, and so on. Its usefulness spans over all stages of a project, from early feasibility studies to detector design to search/analysis strategy development to data interpretation.

The PYTHIA/JETSET code base has also been used by a large number of other programs developed over the years. Some of these have been written by Lund/PYTHIA group members, such as LEPTO, FRITIOF, LUCIAE, ARIADNE, POMPYT, LDC, DIPSY, VINCIA and DIRE. The last two are now integrated into the 8.3 version. The ANGANTYR heavy-ion model was developed as a part of PYTHIA from the onset. An even larger number of programs have been written by non-PYTHIA people, "borrowing" smaller or larger code pieces. Especially the string fragmentation and decay routines are heavily used in most branches of particle physics.

While originally developed only by a few people, today the PYTHIA program is maintained and developed by an international collaboration, listed under Authors. For a more complete historic overview of the PYTHIA event generator, interested readers are referred to the article The PYTHIA Event Generator: Past, Present and Future by Torbjörn Sjöstrand, Comput. Phys. Comm. 246 (2020) 106910 arXiv:1907.09874v1 [hep-ph].

A history note on Pythia

Legend tells that Apollon, the god of wisdom, slayed the powerful serpent Python at Delphi, roughly 120 km west of Athens. He took over or founded - legends vary - an oracle in honour of the fallen enemy. This Pythic oracle became famous throughout the ancient Greek world, and was consulted both by private persons and city-states. Situated on the slopes of Mount Parnassus, a volcanic area, sulphuric vapour seeped from a crevice in the ground. There a local woman, the Pythia, would sit on a tripod and inhale the vapours. Her more-or-less incoherent screams would be interpreted by the local priesthood, and often presented as poems in perfect hexameter. Some of these became famous for their ambiguity, and the disastrous consequences of a misinterpretation. Examples can be found notably in the captivating "The Histories" by Herodotus of Halicarnassus, written around 430 B.C.

Similarly the PYTHIA code is intended to provide you with answers to many questions you may have about high-energy collisions, but it is then up to you to use sane judgement when you interpret these answers. 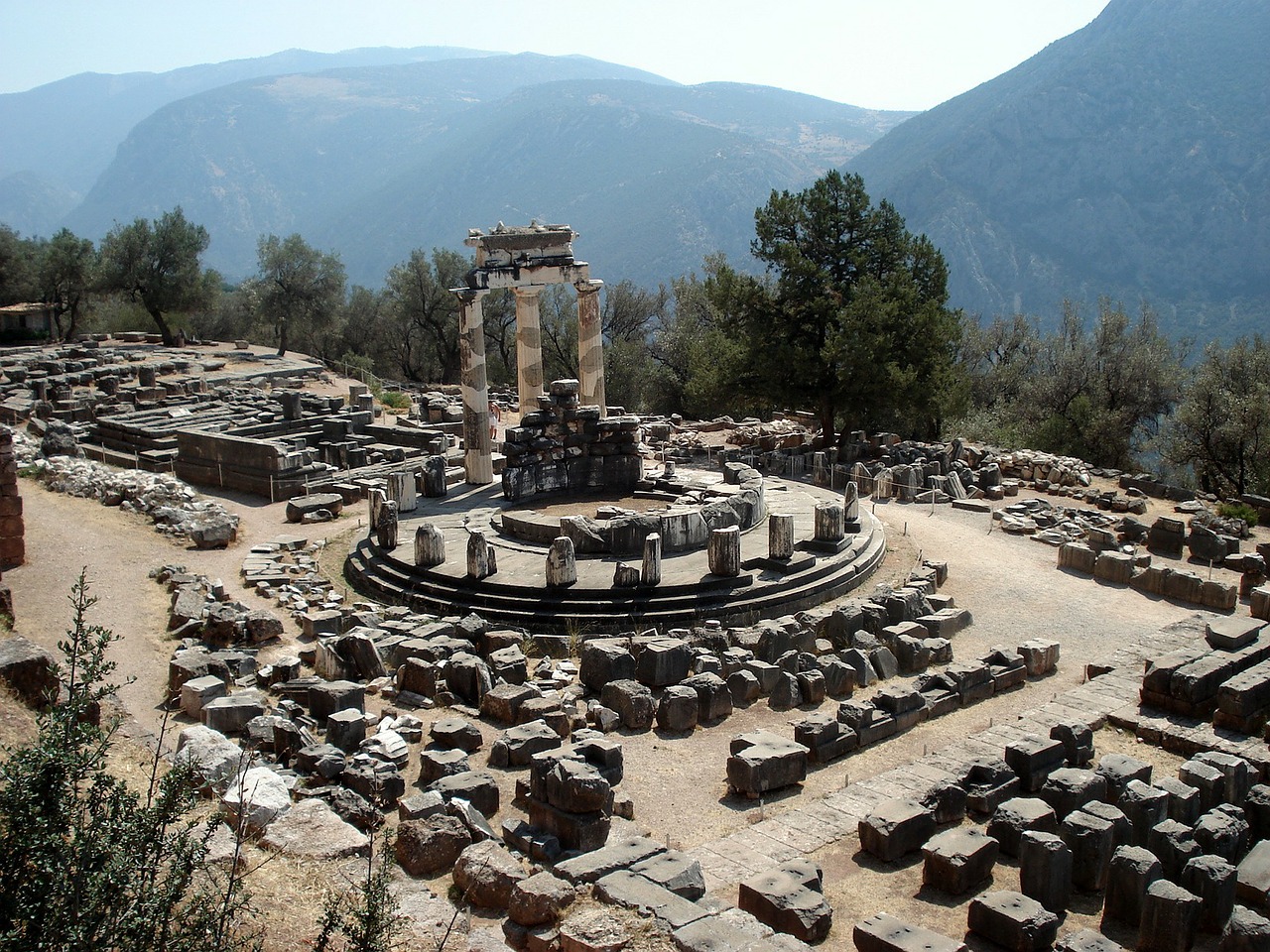 The picture shows the ruins of the Temple of Apollo at Delphi.

The PYTHIA logo, seen in the upper left corner of this web-site, is a stylized representation of the famous artwork from a drinking bowl, which on the left depicts the Oracle of Delphi. 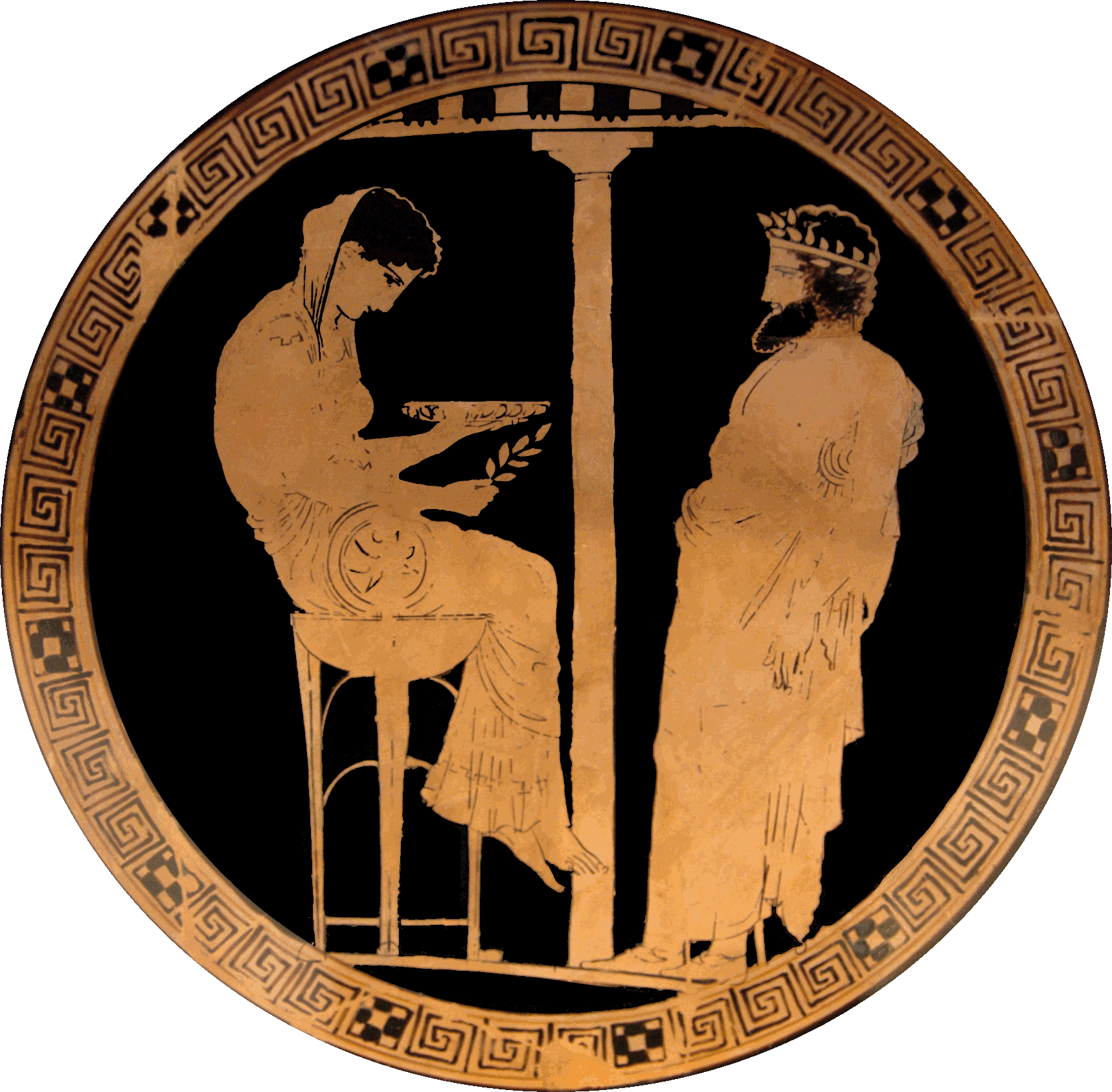 The drinking bowl is displayed in the online collection of Staatliche Museen zu Berlin, where one can also read further about the picture.

The PYTHIA logo can be downloaded for use in presentations as high resolution .png or vector graphics .svg.